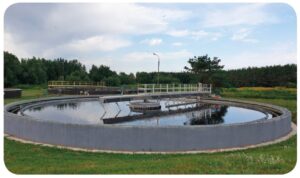 Wastewater Treatment Plant is located in the South part of the Augustów city. It is a mechanical-biological type of plant adapted for deep removal of the biogenic compounds. Water needs to pass several steps and once purifi ed, it is drained to the Netta river. The maximum capacity of the plant is 10 000 m3/day. In June 2018 PRODEKO-EŁK Sp.zo.o. (EKOTON Industrial Group) has been chosen as a main devices and technology supplier to accomplish the task of secondary clarifi er modernization at the Wastewater Treatment Plant in Augustów.

The main goal of the modernization was to:

As part of the signed contract a radial sludge scraper ZGRwt-25 type and the penstock SGSM type have been supplied. The scope of work carried out included preparation of the documentation to fabricate the devices and necessary parts properly adapted to the dimensions of the clarifi er and the sewage disposal channel, as well as assembly and technological commissioning of the supplied devices. 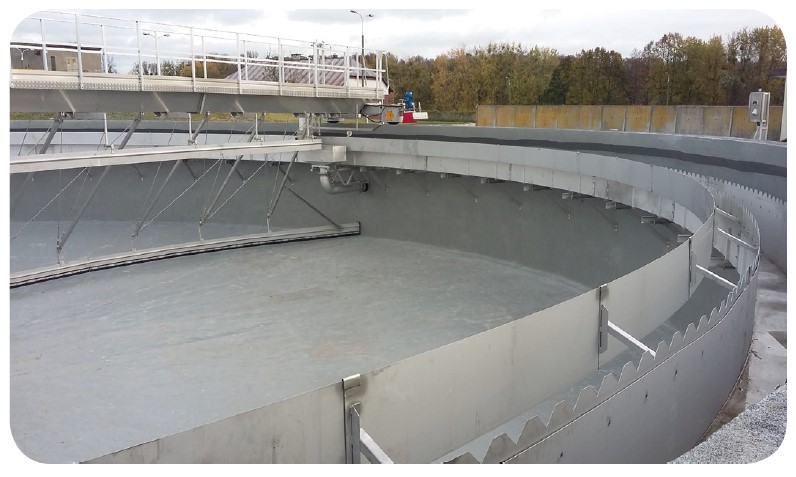 The use of modern technological solutions in the design of devices ensures high work efficiency, energy efficiency and reliability. As a result of replacement of the existing sludge scraper at the Wastewater Treatment Plant in Augustów the following were achieved: 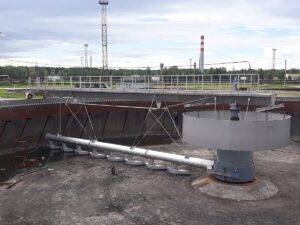 The municipal company of the city of Novosibirsk “Gorvodokanal” cleans and supplies about 600 000 m3 of drinking water and transports and disinfects about 500 000 m3 of sewage per day. Among consumers, more than 1.8 million residents of Novosibirsk and the region. About 70% of the services provided for them. The remaining 30% are industrial companies. The metropolis ranks third in terms of the length of the water supply system in Russia. Gorvodokanal manages about 3,500 km communications, three water intakes, three pumping and filtering stations and 69 sewage pumping stations and also WWTP.

Since 2007, the company has been implementing large-scale investment programs for the technical re-equipment of treatment facilities. The company has been cooperating with the EKOTON Industrial Group since 1997, during which time mechanical treatment complexes (about 20 rake bar screens, screw conveyors and screw compacting presses) were modernized, penstocks were installed and the aeration system was re-placed. As part of the next stage of modernization in 2019, two sets of equipment for radial secondary clarifiers were delivered – radial suction scrapers IRVO-40.

The main objective of the project was to increase the efficiency of sludge removal from secondary clarifiers. The technological condition of the existing equipment at the time of the start of work was unsatisfactory – the suction pumps installed in the 1980s were used. The condition of concrete structures also left much to be desired.

The replacement of equipment was supposed to lead to an improvement in cleaning performance, a reduction in energy consumption, as well as a stable and proper process management.

At the request of the Customer, two radial suction scrapers IRVO-40 with the following design features were produced at the EKOTON plant:

An additional challenge was that, at the request of the Customer, we independently installed the equipment simultaneously with the construction work of the concrete park of the clarifier and the replacement of the discharge tray. Due to the repair of the side part of the clarifier, it was not possible to drive up standard lifting equipment; a crane with a lifting capacity of 250 tons was used. In order to meet the deadlines and not to stop the installation work, one of the two bridges had to be temporarily put on an unfinished side of the clarifier.

Despite the difficulties that arose during the installation of the equipment, it was possible to complete the commissioning in accordance with the schedule.

The use of modern technological solutions in the design of equipment ensured high efficiency, energy
efficiency and reliability. As a result of the replacement of existing radial sludge scrapers at the WWTP “Gorvodokanal” in Novosibirsk, all the necessary customer requirements related to maintenance and
repair were achieved.

The wastewater treatment plant is located in the northern part of the Słupsk city, on the right bank of the Słupia River. It is a mechanical-biological treatment plant, adapted for deep removal of biogenic compounds in a threephase, modified Bardenpho process, supplemented with a predenitrification chamber. The capability of the treatment plant corresponds to 200,000 population equivalent, and the average daily fl ow of about 19 647 m3/day.

In November, EKOTON PRODEKO-EŁK Sp. z o.o. has been selected as a General Contractor and signed an agreement with Słupsk Waterworks for the task: “Delivery of a dewatering centrifuge and scrapers to the municipal sewage treatment plant in Słupsk at ul. Sportowa 73 – task no. 2 – Delivery of the scrapers along with the performance of necessary construction, assembly and installation works.

As part of the contract, the following facilities were modernized:

The modernization included dismantling of the old scrapers, delivery, assembly and kick-start of the new ones and also commissioning and warranty tests.

The preliminary settling tanks were built in the first stage of construction of the wastewater treatment plant in 1986 and equipped with radial scrapers according to the solutions used in the 1970s. As a result of the modernization of the sewage treatment plant in 2006-2009, one of the primary settling tanks has been adapted to the retention and overflow function. The technical condition of the scrapers at the initial stage of the project was very poor and qualified them for replacement. In case of secondary clarifiers,
the situation was similar, with the diff erence that the facilities were built in 1978 and modernized in 2001.

The main goal of the signed modernization project was to improve the efficiency of sludge removal from both primary and secondary clarifiers.

In order to solve the problems and ensure stable and proper conducting of the technological process in both the sewage and sludge part, it was necessary to replace the scrapers in two primary settling tanks with models ensuring greater efficiency and reliability. Ultimately, this meant to improve the balance of the initial and excessive sludge, and thus increase the biogas production and reduce the operating costs of the treatment plant. Also the scrapers had to be replaced on the two existing secondary clarifiers. Part of the modernization was to supply the equipment with so-called side scraper, similar to ones mounted on two clarifiers that were built in 2008-2009.

The modernization project of the preliminary and secondary clarifiers has been carried out between 15th of October 2018 and 28th of March 2019 and consisted of:

As a result of modernization of the preliminary settling tanks, by installing new scrapers, problems related to ensuring stable and correct conducting of the technological process in both the sewage and sludge part were solved. The new scrapers are characterized by greater efficiency and operational reliability, which significantly contributed to the improvement of the initial and excessive sludge balance, and thus to increased biogas production and reduction of the operating costs of the treatment plant.

However, as a result of replacing scrapers in the existing secondary clarifiers with the devices equipped with so-called side-scraper, the removal of activated sludge excess to the surface of the settling tank in relation to normal operating parameters has been eliminated. This, in turn, resulted in a decrease of the total suspended solids discharged with sewage,and with it the load of carbon, nitrogen and phosphorus in the treated sewage to the Słupia river.

By replacing scrapers with ones equipped with the catching scrapers, the duration of active sludge retention within the secondary clarifiers has been shortened, which has prevented the formation of anaerobic conditions and secondary biological dephosphorization, and as a consequence – the process of secondary release of the orthophosphates into the wastewater from the activated sludge accumulated at the bottom. 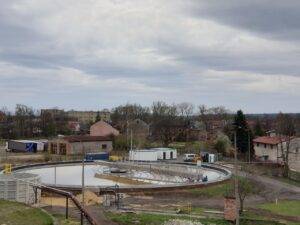 The Paper Factory in Myszków was founded in early 1894 year, where at the time it was the largest paper production plant in Poland. In 2016, the factory became part of the Schumacher Packaging group. To ensure high quality standards and increased paper production plant modernization project has began. One of the main tasks of the project was to increase the throughput of the existing sewage treatment plant located on the production plant premises. In July 2018, PRODEKO-EŁK Sp.zo.o. (EKOTON Industrial Group) was chosen as the main contractor for the modernization of the secondary clarifi er at the Sewage Treatment Plant of the paper factory in Myszków.

The aim of the project was to replace the existing radial sludge scraper and the drainage system of the secondary clarifier with a diameter of 39.4 m. The mounted device is designed to ensure high effi ciency of sludge and floating parts removal.

The modernized secondary clarifi er was not exploited for many years. It was equipped with a radial sludge scraper made from black steel and also concrete drainage troughs. The plan was to remove the scraper with troughs, repair of concrete elements of the clarifier, assembly of a scraper along with the trough system made from stainless steel.

As part of the contract, a ZGRwt-39.4 type of a radial scraper has been delivered with a drainage trough system. The scope of work included preparation of the documentation to fabricate the parts adapted to the size of the settling tank as well as assembly and technological commissioning of the supplied devices.

The use of modern technological solutions in the sludge scraper designing ensured high work efficiency, energy efficiency and reliability. As a result of the installation of the new scraper hasthe following goals have been achieved: 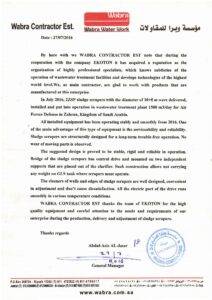 By here with we WABRA CONTRACTOR EST note that during the cooperation with the company EKOTON it has acquired a reputation as the organization of highly professional specialists, which knows subtleties of the operation of wastewater treatment facilities and develops technologies of the highest world level. We, as main contractor, are glad to work with products that are manufactured at this enterprise.

In July 2016, 2 ZSP sludge scrapers with the diameter of 10+8 m were delivered, installed and put into operation in wastewater treatment plant 1500 m3/day for Air Forces Defense in Zahran, Kingdom of Saudi Arabia.

All installed equipment has been operating stably and smoothly from 2016. One of the main advantages of this type of equipment is the serviceability and reliability, Sludge scrapers are structurally designed for a long-term trouble-free operation. No wear of moving parts are observed.

The suggested design is proved to be stable, rigid and reliable in operation. Bridge on the sludge scrapers has central drive and mounted on two independent supports that are placed out of the clarifiers. Such construction allows not carrying and weight on GLS tank where scrapers must operate.

The cleaners of walls and edges of sludge scrapers are well designed, convenient in adjustment and don’t cause dissatisfaction. All the electric part of the drive runs smoothly in various temperature conditions.

WABRA CONTRACTOR EST thanks the team of EKOTON for the high quality equipment and careful attention to the needs and requirements of our enterprise during the production, delivery and adjustment of sludge scrapers.